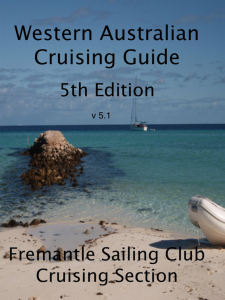 Western Australian Cruising Guide, published by The Fremantle Sailing Club. This is regarded as the coastal cruising bible for WA. It includes many anchorages, routes, both in charted and uncharted waters, plus a brief history of many of the places you are likely to visit. It covers the whole of the WA coast, but is particularly relevant for the Kimberley coast.

Now in it’s fifth edition, I recommend using only the latest edition, as the editors have updated information obtained from recent trips to the Kimberley and other areas. This is a definite “Must Have” in the Kimberley. Previous editions were in a book form, but the latest edition is downloadable in two electronic formats, without charge:

A pdf file, for reading on any computer, tablet or smartphone with Acrobat Reader installed.

An ePub file, for use with e-readers such as Kobo, and any platform with software such as Adobe Digital Editions, or iBooks (Apple devices only).

This will enable the guide to be read on almost  any platform, including desktops (PC and Mac), laptops, tablets (ipad etc.), android phones and iphones. 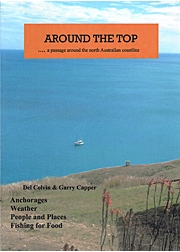 Around The Top, by Del Colvin and Garry Capper. This book is more of a true story of this couples passage from Brisbane to the Kimberley, than it is a cruising guide for anchorages, routes and waypoints. It includes many of the anchorages they used on their journey, generally with accurate descriptions and good mud maps.

It describes the places they visited, people they met, history of the various areas and towns visited, and Del’s obvious passion for fishing is also well represented.

The writer’s style is entertaining and they share their experiences and lessons learnt along the way. I enjoyed reading this book, and I can recommend it purely as an excellent read, with the bonus of some well described anchorages. 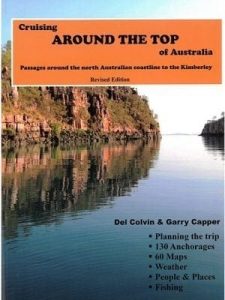 A revised edition was released by Del and Garry in 2016, which is much more of a cruising guide. It includes anchorages up the Queensland Coast, across the top from Cape York to Darwin, and much of the Kimberley Coast’s popular anchorages.

It includes 130 anchorages, 60 mud maps and plenty of common sense advise about cruising around the top of Australia, mostly learnt from their own experience.

This book is also a good read, and well worth having on board, particularly for the first time sailors heading north of Cairns and across the top into the Kimberley. 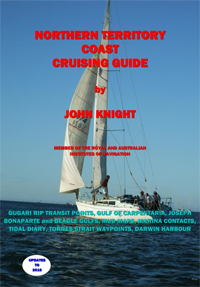 Northern Territory Coast Cruising Guide, by John Knight. This book was originally published in 1986, and the latest edition has been updated by Diane Andrews in 2008. It covers the Northern Territory coastline from the Queensland border to the West Australian border. It includes detailed and excellent information on the maritime history of the area, along with information on the climate, tides and seamanship specific to the northern tropical waters.

It is worth buying if you intend coast hopping around the southern and western Gulf of Carpentaria and across the Arnhem Land coast to Cape Don. This coastline is sparsely documented and the book provides difficult to find information.

Sailing cruisers making slower passage with several overnight anchorages will find it very useful. However, if you are in a power boat making quicker passage from Queensland to Darwin with limited overnight anchorages and a few days cruising the more popular spots, such as the Wessel Islands, you probably won’t make much use of it.

It was written pre-digital age, and unfortunately many of the charts and mud maps are fuzzy and some are difficult to read. It also lacks sub headings and a detailed index, which makes finding the page for a specific bay you are planning to visit, more than a little frustrating. 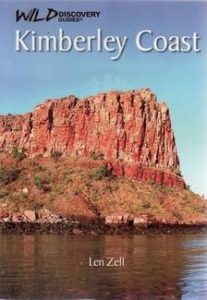 Kimberley Coast, by Len Zell. Published by Wild Discovery, this book is not a cruising guide with waypoints for anchorages and routes, but it is an excellent guide and description of the natural history, human history, wildlife, plants and geology of the Kimberley coast.

The book only covers the coastline of the Kimberley, therefore it is specifically interesting to cruising boaties. It has hundreds of colour photos, many identifying the animals, plants and fish you are likely to see in the Kimberley.

This is an excellent reference book and you will find yourself picking it up many times to study up on the area you are in, or are heading into. Well worth buying.

Available from Wild Discovery and nautical book shops such as Boat Books Australia and The Chart and Map Shop. 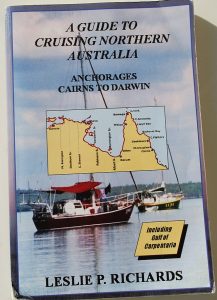 A Guide to Cruising Northern Australia – Anchorages Cairns to Darwin by Leslie Richards. I have the previous edition of this book, and I don’t know if there have been any major additions or changes to this latest edition. The edition I own describes a comprehensive list of anchorages, progressing along the coast line starting at Cairns, up to Cape York, down the eastern side and up the western side of the Gulf of Carpentaria, then across the top to Darwin.

This book is worth having on board because the area it covers is sparsely documented by other publications. However, users should be wary of the quality and accuracy of many of the “mud maps” in the book. Some of them bare very little resemblance to the actual charted areas, and I wonder why the author did not simply trace a chart for his hand drawn mud maps, instead of what looks like drawing from memory. It’s saving grace is that it has chart details and map coordinates for each of the mud maps, but I have found some of these are incorrect.

Worth having on board for reference purposes, but do not rely on it’s accuracy.

A Guide to Cruising Northern Australia – Anchorages Darwin to Carnarvon by Leslie Richards.This is a similar publication to the Cairns to Darwin book. The mud maps are highly inaccurate, and he has marked anchorages in areas that I would not consider anchoring my boat, but he has not marked other, far safer and well known anchorages that are located in the same areas covered by some of the mud maps. My advise is stick to the Western Australian Cruising Guide for this coastal area.

As with it’s sister publication, Anchorages Cairns to Darwin, it’s saving grace is that it has chart details and map coordinates for each of the mud maps.

Use this book purely as a reference and do not rely on it’s accuracy. 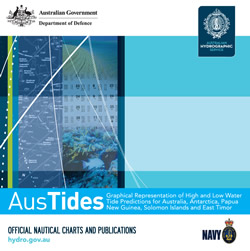 AusTides, previously known as Seafarer Tides CD, published by The Australian Hydrographic Service. This CD should be loaded on every Australian coastal cruising vessel’s laptop.

AusTides is an official electronic product that is equivalent to paper Australian National Tide Tables (ANTTs). AusTides contains information for over 680 Primary (Standard) and Secondary ports in Australia, Papua New Guinea, Solomon Islands, Antarctica and Timor-Leste. This information includes but is not limited to:

It includes tide tables for the current and previous years only. A new CD is produced each year. It has an easy to use format. My experience is that it has more Australian tide stations than any of the GPS chart plotter software I have used.

I have 2 chart plotters, with Navionics and C Map charts on board my boat and in some spots the tide tables can vary widely. When tidal accuracy is important, I always prefer to put my trust in the Aus Tides tables on my laptop.

A demonstration and further information is available at The Australian Hydrographic Service website.