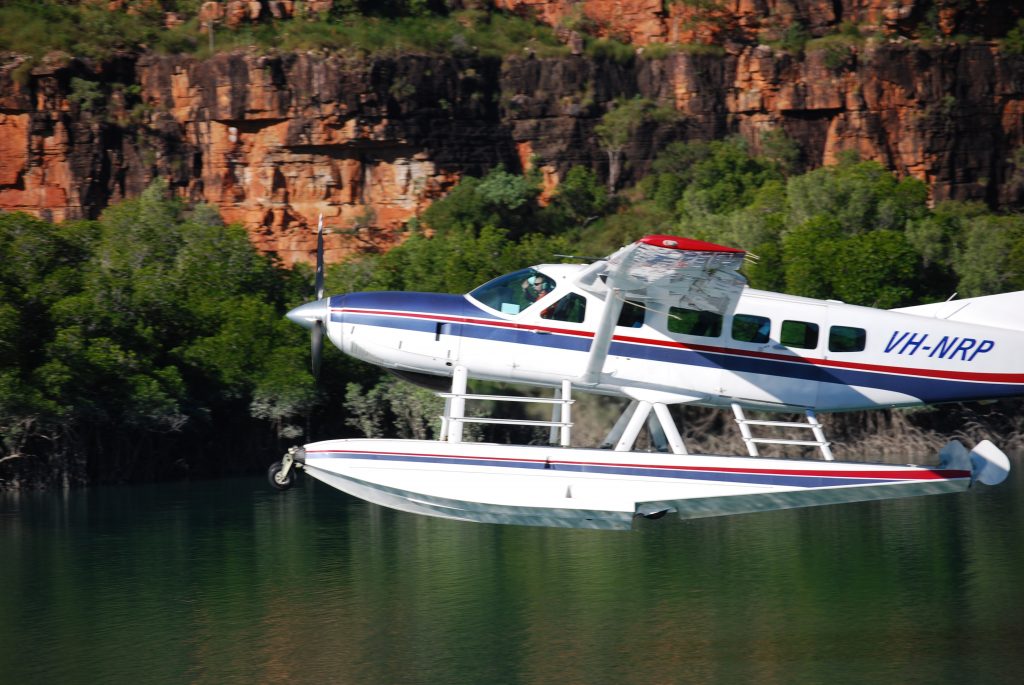 Except for a few very difficult 4WD tracks, the only road into the Kimberley coast cruising waters between King Sound and the Cambridge Gulf, is to Kalumburu via the Gibb River Road. Therefore, light aircraft, or helicopter charter is often the only way to transfer crew, or get supplies into your boat while you are in the Kimberley.

There are also very few remote airstrips near the coast that can be used by light aircraft. Chartering a floatplane, or helicopter is therefore a viable alternative to land based light aircraft, although they can be far more costly.

The remote airstrips from Berkeley River to Mitchell Falls are usually reached by light aircraft from Kununurra. Mitchell Falls can also be reached from Derby or Broome in the west.

The remote airstrips from east to west are:

Faraway Bay Resort. Gravel strip operated by the resort. The airstrip is about 4 kms inland and transport to and from the water must be arranged with the resort. Fees apply. You need to make arrangements with the resort well in advance if you want to use the strip. If they are busy, they may not be able to assist with transport to and from the airstrip. Do not just turn up and expect them to help you! The resort is on private land, and promotes itself as being remote and exclusive, and they don’t appreciate boaties turning up on their beach without prior notice and permission.

Kalumburu. Sealed strip for public use. No landing fee. Transfer to and from the water can be arranged with Honeymoon Bay Camping Ground, or McGowan Island Camping Ground, which are about 30kms and 21kms by 4WD from the airstrip. There are no taxis, or public transport in Kalumburu. See the Napier Broome Bay Anchorage page for details.

Mitchell Falls. Gravel strip operated by WA Parks and Wildlife. The only access to the water is by helicopter to/from a beach landing on Naturalist Island near the mouth of the Hunter River. Make arrangements with the aircraft charter operator for a chopper transfer.

Cockatoo Island. The airstrip is owned by the iron ore mine on the island. The resort started by Alan and Eileen Bond in the 1980’s is reported to re-open in 2018. The resort has rights to use the airstrip, and their light plane can be chartered for crew transfers and supplies out of Broome. At the time of writing this, the resorts website was not up and running and we only have a private mobile phone numbers at this point. Their business contact details will be added here when they become available.

Koolan Island. The island is managed by Mt Gibson Mines, which mines iron ore on the island. For safety reasons, public use of their airstrip is not allowed, except in an emergency.

Aviar started a scheduled passenger service between Kununurra and Kalumburu in 2017. Using this service may be an economic alternative to chartering an aircraft if you have less than 4 passengers.

Paspaley Pearls. Float plane charter out of Darwin to any of their pearl farms, or other landing places they consider suitable. They operate Grumman Mallard float planes. They can be relatively expensive to charter, due to the distance they need to fly from Darwin, compared to other operators flying out of Kununurra. However, if you have several crew members coming and leaving your vessel, it can be economical. They also fly their own crew in and out of their pearl farms, and it may be possible to get a spare seat or two on one of these flights. Phone (08) 8920 6609 www.paspaleygroup.com/aviation Email dwnrecp@pearlav.com.au