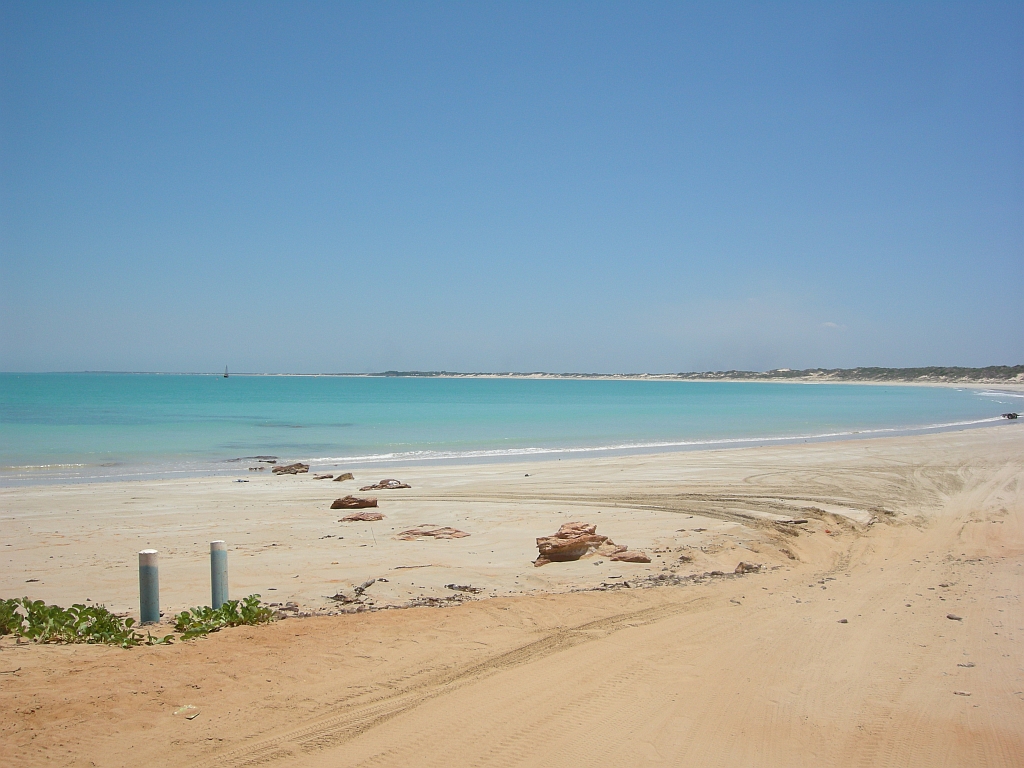 Cable Beach looking towards Gantheaume Point anchorage from the north. At low tide it’s at least 400M to the water line from high water.

Broome is usually a must stop port for boats cruising up from Perth to refuel and resupply before sailing into the Kimberley coast cruising area. For many it will be the last chance to stock up on food and drinks for several weeks, or months. But being frank, Broome can be hard work for cruising boaties. There is no marina, refuelling is off the commercial shipping wharf run by the Broome Port Authority, and getting ashore for sightseeing and shopping requires a vehicle to get to and from the recognized dry season anchorage at Gantheaume Point, 17° 57.86 S – 122° 11.55 E, which is 7-8 km  from the CBD. Gantheaume Point has moorings, but they are usually booked out for the dry season, or are privately owned and used by the local charter boat fleet. Contact Broome Mooring Hire and Services 0406 938 540. It’s the only anchorage safe from the persistent south easterlies common in the dry season, but is open to the westerly swell, which makes it a very rolly anchorage at times. Holding can also be a problem in the hard packed sand bottom. The hire car operators won’t allow their vehicles on the beaches, which makes it difficult to get supplies out to your boat. The water is hundreds of meters down the beach at low tide, so it’s wise to time the high tide for transferring goods from car to dingy. Some risk the wrath of the hire car giants and deliver their loads of groceries to the tide line by car. Its also hard to envisage the local taxi drivers or Uber being keen to drive their cars on the beach. 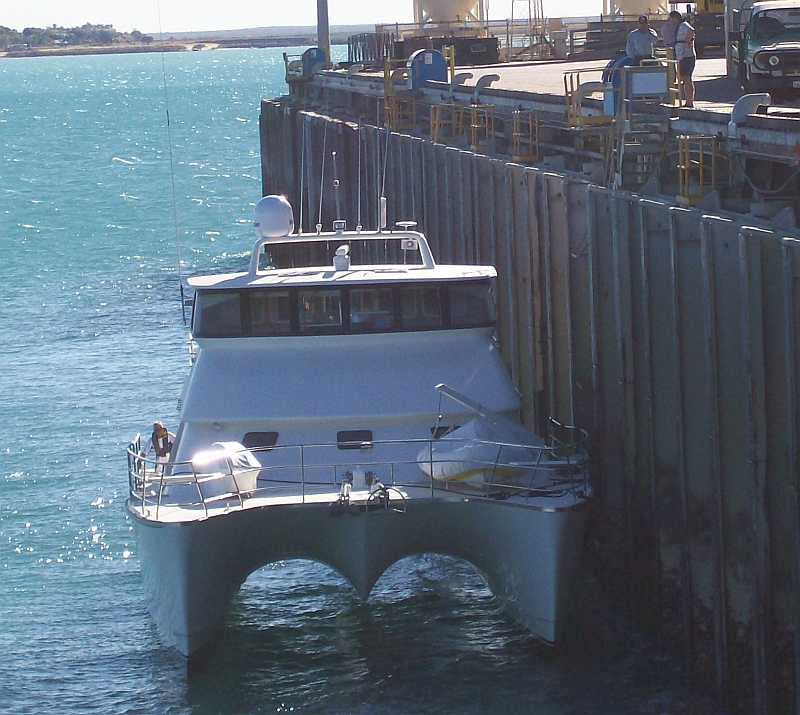 Zorba, who runs Broome Mooring Hire and Services, phone 0406 938 540 will ferry fuel to your vessel at his moorings at Gantheaume Point in 1000 litre pods in his work boats.

Alternatively, contact Broome Port Authority  http://www.kimberleyports.wa.gov.au/ Phone (08) 9194 3100 Fax (08) 9192 1778. The writer last fuelled at Broome in 2007. We were able to tie up to the wharf without forward notice, and after a few phone calls to the fuel distributor, who came to the wharf and unlocked a pump for us, we were able to get fuel without too much difficulty. Although, we were told that the only reason he met us, was because there was a navy boat booked to load fuel, which he was waiting for. Since then, the port has become a logistics base for the massive offshore gas projects in the area and has tightened up their security and safety procedures accordingly, so expect the bureaucracy associated with such facilities. Other boaties have reported that vessels must now give 24 hours notice and pay a docking fee to tie up at the wharf. Contact both the Port Authority and your selected fuel distributor well in advance. The fuel distributors can be found at http://www.kimberleyports.wa.gov.au/Port-of-Broome/Port-Operations/Bunkering-and-refuling-services. There has also been an unconfirmed report in 2016 that the BP distributor will only accept BP cards for payment of fuel from the wharf. Check the available payment methods with the supplier before you tie up to the wharf.

Be aware that the fuel wharf is very high, and tying off to the wharf deck bollards is not an option, except perhaps on spring high tides. The wharf has large steel pylons with heavy duty plastic rubbing strips attached. At low tide they are oyster covered and can be awkward to get a heavy rope around. If your mooring ropes are heavyweights, go armed with a light rope with a weight attached to throw around the pylons and use it as a lead line for heavier mooring ropes. Fuelling is best done on the top half of the tide. The wharf is affected by reasonable strong tidal movement and the easterly breeze. Caution should be exercised when docking. Sailing vessels need to take particular care at this very high wharf at low tide – a rolling sea could easily smash rigging and masts against the wharf. Also keep a close watch on your mooring ropes that are tied off to the wharf, as the tide rises and falls quickly. For smaller vessels that dont require bulk fuel, a better option may be to load fuel by jerry can.

Broome is very much a tourist hub for the West Kimberley region, and is certainly worth visiting, but perhaps consider visiting Broome by land, not by boat. If you’re cruising from the east, and your only reason for going to Broome by boat is to buy fuel, consider the option of paying the extra cost for the fuel at Dog Leg Creek, and don’t waste valuable fuel range and time cruising to Broome. Two separate Perth based KCCYC members reported in 2016 that they took on sufficient fuel and supplies at southern ports, so they could perposely bypass Broome on their cruise to the Kimberley.

Shopping. Broome has all the shops you would expect in a thriving regional tourist town. Daily flights from Perth and the Eastern States make it an easy matter to fly in parts, spares and crew.

Marine Repairs. Due to the lack of a marina facility, Broome’s marine repair industry is mostly about trailer boats. There is a rudimentary yacht haul out facility run by the Port Authority, located adjacent to the Broome wharf.